Cristobalite is a polymorph of all of the members of the Quartz Group of minerals. These include Quartz, Coesite, Tridymite and Stishovite. A polymorph means that these minerals have the same chemistry, SiO2, but different structures. Cristobalite is common as microscopic crystals in volcanic rocks but larger, well formed crystals found in the vesicles of volcanic rocks are rare. Cristobalite itself could not be faceted, but bright white Cristobalite crystals captured in transparent black Obsidian (as pictured above) can make very attractive gems. These gems have been called Cosmic Obsidian. Material from Lipari Island, Messina Province, Sicily, Italy is the main source of this type of gem. 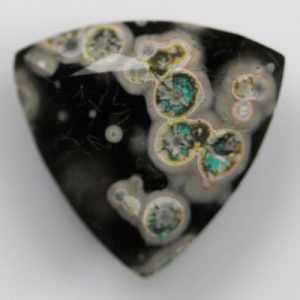