Esperite is a rare complex calcium lead zinc silicate mineral that was discovered in 1928 at the Parker shaft of the Franklin Mine, Franklin, Sussex County, New Jersey, USA. It was originally named calcium-Larsenite for its calcium content and relationship to Larsenite (PbZnSiO4). Larsenite was named in 1928 by Charles Palache, Lawson Henry Bauer and Harry Berman to honor Esper Signius Larsen, Jr. (1879 – 1961), petrologist and Professor of Geology at Harvard University, Cambridge, Massachusetts, USA. Calcium-Larsenite was renamed “Esperite” in 1965 by Paul Brian Moore and Paul H. Ribbe also in honor of Esper Larsen, Jr. It was approved by the International Mineralogical Association (IMA) as a valid distinct mineral species in 1965.

Esperite is one of over 350 types of minerals found at Franklin and Sterling Hill, New Jersey. It is also one of about 89 fluorescent minerals found there. Esperite has a white or off-white to pale tan appearance in daylight but is prized for its brilliant yellow to yellow-green fluorescence under shortwave (SW) ultraviolet (UV) light (click on the picture above to see its color under SW-UV light). It is often found in association with other fluorescent minerals such as Calcite, Hardystonite, Willemite, Clinohedrite and non-fluorescent, black Franklinite. Although Esperite is mainly known for its occurrence at Franklin, it is also found as prismatic crystals up to 1 mm in length at the El Dragón Mine, Antonio Quijarro Province, Potosi Department, Bolivia. These are the only two localities known to contain Esperite. 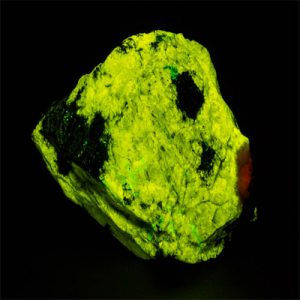