Ettringite is an extremely rare gem and a member of the Ettingite Group of minerals that includes Charlesite, Ettringite, Sturmanite and Thaumasite. Ettringite crystals are usually very small so gems are very small. Ettringite is closely related to and difficult to distinguish from Sturmanite. Ettingite crystals are usually found as colorless but have been found as yellow to pale yellow from the source at the N’Chwaning mine, Kuruman district, Cape Province, South Africa. This location is currently the only source for gem quality crystals. Other locations of Ettringite only produce minute crystals too small for faceting. 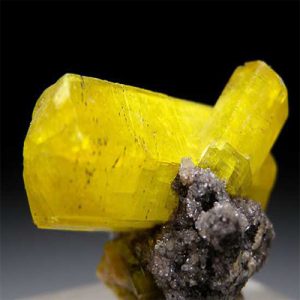