Eudialyte is a gem that is rare in 1819 in the Kitaa Province of Greenland. It is very seldom discovered as crystals clean sufficient for faceted and faceting gems are always little and usually included. It is mostly available as cabochons and known for its beautiful colors of reds and pinks and often translucent. Major sources of Eudialyte material are the Kola Peninsula in Russia and in Canada at Mont Saint-Hilaire and the Kipawa specialized at Sheffield Lake, both in Quebec. Eudialyte is obviously composed of numerous minerals: Sodium, Cerium, Iron, Manganese, Zirconium, Silicon, Hydrogen, and Chlorine. It frequently contains traces of Yttrium also. Eudialyte could be mildly radioactive as defined in 49 CFR 173.403 (greater than 70 Bq/gram) as a result of the clear presence of Cerium (Ce). 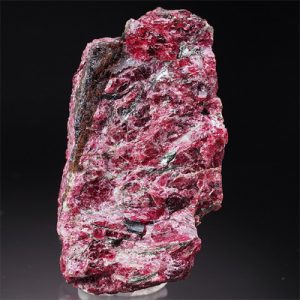