Kamacite is a nickel-rich variety of iron and is the principle constituent of the iron that is typical meteorite. Iron found on Earth is mostly in the shape of meteorites that have impacted our planet’s surface. There are very few sources of “native” iron. A few unusual terrestrial gabbros (intrusive igneous rocks) and sulfide deposits do contain iron-nickel that is elemental. These are the only iron-nickel that is really native.

All iron that is natural whether it is native or meteoritic, is actually an alloy of iron and nickel. The 2 elements are combined in varying percentages from not as much as 6% nickel to as much as 75% nickel, although iron is undoubtedly more common than nickel. Kamacite contains about 92% iron and 7% nickel. Another variety that is nickel-rich of meteorite is Taenite which typically contains about 25 – 40% iron.

Terrestrial occurrences of native iron are found at Blaafjeld, near Ovifak, Disko Island, Greenland; in Germany, from Bühl, near Weimar, Hesse; in the Putorana Plateau, Taimyr Peninsula, Russia. Iron. 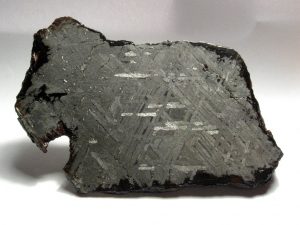