Narsarsukite is a rare silicate mineral and gem that was described in 1900 from the locality at Narsarsuk, Greenland but not approved by the IMA until 1990. Narsarsuk is the result of agpaitic pegmatite intrusions, an unusual igneous rock that is high in alkaline metals such as sodium and poor in silica. The chemical formula of Narsarsukite is Na2(Ti, Fe)Si4(O, F)11 (Sodium Titanium Iron Silicate Fluoride) and its molecular weight is 387.19 gm.

These intrusions also contain a large number of unusual elements such as titanium, fluorine and rare earth metals. Narsarsukite is also found at Mont Saint-Hilaire (MSH), Quebec, Canada which is another agpaitic pegmatite location. MSH is probably the best location for fine Narsarsukite specimens with relatively large and well-formed crystals. Narsarsukite may also include yttrium, calcium and potassium, but they are usually not significant enough to be included in the general formula.

Narsarsukite can be found at these locations: Narssârssuk; on the Island of Igdlutalik, in the Ilímaussaq intrusion; and in the Werner Berge complex, Greenland. On Mt. Flora, Lovozero massif, Kola Peninsula; in the Murun massif, southwest of Olekminsk, Yakutia; and other less-well-defined localities in Russia. In the Oslofjord, Norway. At the Bellerberg volcano, two km north of Mayen, Eifel district, Germany. From near Whitlash, Sweetgrass Hills, Sweetgrass County, Montana; in the Diamond Jo quarry, Magnet Cove, Hot Spring County, and from Granite Mountain, near Little Rock, Pulaski County, Arkansas, USA. At Mont Saint-Hilaire, Quebec, Canada. From Gouré, Damagaram, Niger. In the Sirwa massif, north of Ouarzazate, Morocco. 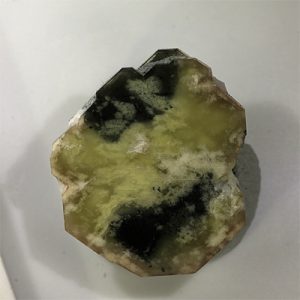