Natrolite is one of the more popular and well-known members of the Zeolite Group of minerals that includes over 40 minerals and these gem-type minerals: Analcime, Barrerite, Chabazite, Epistilbite, Gmelinite-Na, Goosecreekite, Mordenite, Natrolite, Pollucite, Scolecite, Stellerite, Stilbite, Thomsonite and Yugawaralite. Natrolite usually forms as elongated crystals so faceted gems are often cut as elongated emerald cut gems. Natrolite gems are colorless and have weak dispersion and might be considered somewhat uninteresting except for the fact that Natrolite is both piezoelectric and pyroelectric and commonly exhibits yellow to orange or pale green fluorescence under both shortwave and longwave UV light.

Natrolite was discovered in 1803 at Hohentwiel, Singen, Hegau, Baden-Württemberg, Germany. Hohentwiel is an extinct volcano. Natrolite was named by German chemist Martin Heinrich Klaproth (1743-1817) from the Latin word natron meaning soda, for its sodium content, and the Greek word λίθος, (lithos) meaning stone. 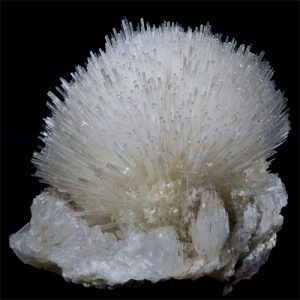