Niccolite or Nickeline is an opaque, pale copper-red, metallic nickel arsenide mineral that is a member of the Nickeline Group of minerals. The chemical formula of Nickeline is NiAs (Nickel Arsenide) and its molecular weight is 133.61 gm. Nickeline is an unusual but very beautiful gem with its bright, metallic lustre and peachy red to pale copper red colors. The Hardness is 5.0 – 5.5 and the specific gravity 7.784 (g/cm3). Nickeline alters to Annabergite, a coating of green nickel arsenate, on exposure to moist air.

Nickeline was originally named kupfernickel in 1694 by a Swedish chemist, geologist, physician and writer Urban Hjärne (1641-1724) from the German words meaning copper-nickel, referring to its pale copper colors and nickel content. Nickel was named after Old Nick, a mischievous and deceptive spirit of German mythology, because the ore seemed to contain copper because of its color, but yielded none. Kupfernickel was renamed Nickeline in 1832 by French mineralogist and geologist François Sulpice Beudant (1787-1850) for its nickel content. It was also renamed Niccolite by American geologist, mineralogist, volcanologist, and zoologist James Dwight Dana (1813-1895) in 1868 from the Latin word niccolum meaning nickel. Nickeline is the IMA recognized the name.

Nickeline distribution: in Germany, from Eisleben and Mansfeld, Saxony-Anhalt; at St. Andreasberg, Harz Mountains; from Schneeberg, Saxony; crystallized at Richelsdorf, Hesse-Nassau. From Schladming, Austria. At Jáchymov (Joachimsthal), Czech Republic. From the Chalanches mine, near Allemont, Isère, France. In the USA, at Silver Cliff, Custer County, and in the Gem mine, Fremont County, Colorado. In Ontario, Canada, from the Cobalt–Gowganda and Sudbury districts, and at Silver Islet, Thunder Bay district. At Cochabamba, Bolivia. From the Aït Ahmane mine, 10 km east of Bou Azzer, Morocco. In the Talmessi mine, 35 km west of Anorak, Iran. At the Ban Phuc Ni–Cu deposit, northwestern Vietnam. Many additional occurrences have been noted. 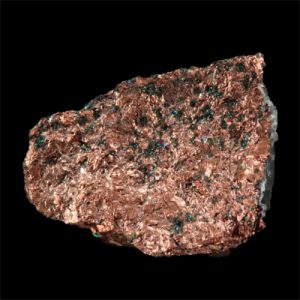