Rodingite is a somewhat rare mixture of minerals. The name Rodingite was first used by P. Marshall in 1911 to describe certain dike rocks from Roding River, Dun Mountain area, Nelson, New Zealand, consisting of Grossular Garnet along with other calcium silicate minerals such as Vesuvianite, Prehnite, Wollastonite, Diopside, and hydrogrossular. Since then the name Rodingite has been applied to garnered gabbros and dolerites by various authors. Grange (1927), Miles (1950), and Bloxam (1954) have described garnered gabbros from different parts of the world. A recent limited find of Rodingite in Kazakhstan has produced very attractive material consisting of Grossular Garnet (white) and the manganese-rich variety of Vesuvianite (purple) as pictured above. 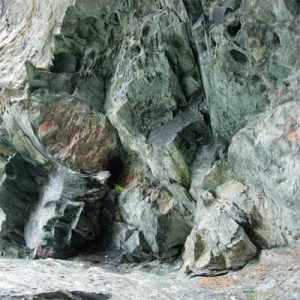