Romanèchite distribution: although common in occurrence, characterization by X-ray, chemical analysis, or both, is necessary. Authenticated from: Romanèche, Saône-et-Loire, France. In Germany, well-crystallized from Schneeberg, Saxony, and at the Clara Mine, near Oberwolfach, Black Forest. From the Restormel mine, Lostwithiel, Cornwall, England. In the USA, at Austinville, Wyeth County, Virginia; from Sodaville, Mineral County, Nevada; at the Hoggett mines, Hidalgo County, New Mexico; at the Tolbard mine, Paymaster district, Imperial County, California. In the Talmantes mine, near Parral, Chihuahua, Mexico. From Pilbara, Western Australia. 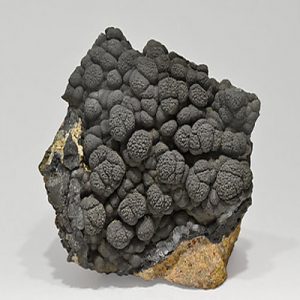