Sahara Nuummite, also called Jenakite, is a variety of Nuummite which is an unapproved name for a metamorphic orthoamphibole rock consisting primarily of two amphiboles – Anthophyllite and Gedrite. Nuummite was discovered in Greenland in 1982 and was only known to occur in Greenland until 2009 when a new source of gem-quality iridescent orthoamphibole was discovered in the Sahara Desert of central Mauritania.

Several samples of this new material were donated to GIA by Scott Davies of American-Thai Trading in Bangkok. This Nuummite from Mauritania has an iridescence that is mostly blue to bluish green, although some stones show golden yellow and a small percentage are a highly desirable pure blue. Unlike the original Greenland rocks, the new Sahara Nuummite often has a high density of needles, some of which can show a quite attractive blue color. The blue color is said to be due to the presence of titanium. The stones take a good polish, but cutting the material is challenging as the colorful iridescent needles only appear in very thin planes with a very narrow viewing orientation in the rough making yields low.

Raman spectra of the iridescent laths were consistent with Anthophyllite and Gedrite, which are orthorhombic members in the magnesium-iron-manganese-lithium amphibole group. Testing confirmed that the flashy needles are in fact the amphibole Anthophyllite, the main component of Nuummite. The samples had RI measurements between 1.649 and 1.669, consistent with the Raman identification. Hydrostatic specific gravity was 2.98 ± 0.05, and the samples were inert to long- and short-wave UV radiation. 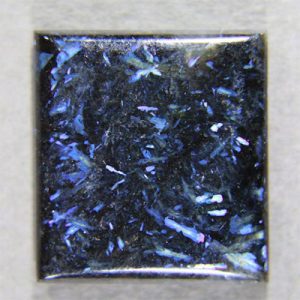