Scheelite is a member of the Scheelite Group of minerals that includes Powellite, Scheelite, Stolzite and Wulfenite.Scheelite is an important ore of tungsten which is a strategically important metal. Scheelite crystals are found at many locations around the world including several in the US. Gem quality, the facetable material is somewhat rare however. Ultraviolet lamps can be used to search for Scheelite at night because of its typically bright blue fluorescence. Scheelite has a fairly high refractive index (RI) value of about 1.93 which is similar to the RI value of Sphene and slighlty higher than that of Demantoid Garnet. Scheelite is found in colors of pale yellow, orange-yellow, brownish, greenish, violet, reddish and colorless.

Distribution: An important ore of tungsten, with many localities. Some for fine and large crystals include: from Sweden, at the Bispberg iron mine, near S¨ater, Dalarne. In Germany, from Altenberg and Schwarzenberg, Saxony. At C´inovec (Zinnwald) and Horn´i Slavkov (Schlaggenwald), Czech Republic. From Traversella, Piedmont, Italy. At Tenkergin, Chukotka, Siberia, Russia. In the Natas mine, about 80 km south of Windhoek, Namibia. Large crystals from the Tae wha mine, Chungju, North Chungchong Province, South Korea. At Pia Oac, Tonkin, North Vietnam. In China, from near Pingwu, Xuebao Ding Mountains, Sichuan Province, China. A large deposit in the Flat River Valley, Northwest Territories, Canada. In the USA, in Arizona, large crystals from the Cohen mine, Dragoon Mountains, Cochise Co.; commercially mined at the Pine Creek mine, near Bishop, Inyo Co., California. At Mitopilas, Sonora, Mexico. In the Morro Velho gold mine, Nova Lima, Minas Gerais, Brazil. 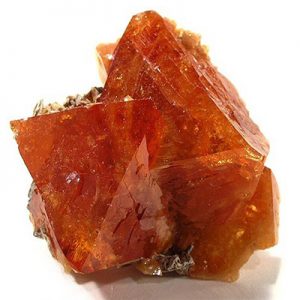