Wavellite is a relatively common mineral but extremely rare as a faceted gem. As a mineral specimen it demonstrates the classic radiating globule crystal habit. It could almost be said that Wavellite is the type mineral for this habit. When the globules are broken in half, a very attractive, almost perfectly round, radial cluster can be seen. Faceted gems can also show this radial pattern. The radiating needles reflect light to produce a beautiful sparkling effect. Wavellite is found in several colors including white, green, yellow, blue, brown and black although green is the most common color.

Wavellite is available from many localities. In the High Down quarry, Filleigh, near South Moulton, Devon, England. At Clonmel, County Tipperary, Ireland. In Germany, in the Rotläufchen mine, Waldgirmes, at the Dünsberg, near Giessen, from Oberscheld, near Dillenburg, and elsewhere in the Lahr-Dill area, Hesse; on the Wachtelberg, Langenstriegis, west of Freiberg, Saxony; from the Lichtenberg quarry, near Ronneburg, Thuringia; and elsewhere. At Cerhovice, near Beroun (Beraun), Czech Republic. Near Bihain, Belgium, large rosettes. At Montebras, Creuse, France. In the USA, from General Trimble’s mine, Chester County, Pennsylvania; in the Wood mine, Cocke County, Tennessee; abundant around Avant, as on Dug Hill, Garland County, and from the Mauldin Mountain quarry, near Mt. Ida, Montgomery County, Arkansas; in the Willard mine, Willard district, Pershing County, Nevada. In Bolivia, fine examples from Llallagua, Potosí, and Oruro. At the Moculta phosphate quarry, northeast of Angaston, and the Iron Monarch quarry, Iron Knob, South Australia. 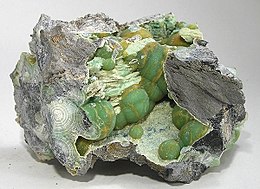