Wendwilsonite is a rare secondary mineral in cobalt-bearing hydrothermal mineral deposits and is the magnesium (Mg) analogue of Roselite. In early 1985 Pete J. Dunn of the Department of Mineral Sciences, Smithsonian Institution, Washington, D.C., U.S.A. examined a pink mineral from Sterling Hill, New Jersey. Analysis of the mineral showed it to be almost identical to Roselite. However, Roselite has a cobalt (Co)-dominant chemistry and the samples from Sterling Hill, New Jersey as well as from Coahuila, Mexico and many from Bou Azzer, Morocco, proved to be magnesium (Mg)-dominant, and thus represented a new mineral species and the creation of the Roselite-Wendwilsonite Series. Samples of Wendwilsonite from Bou Azzer, Morocco consist of pink glassy crystals, up to 6 mm in size, associated with Talmessite and Erythrite on altered ore and Calcite gangue. At Sterling Hill, Wendwilsonite forms 0.5-mm crystals with Calcite crystals on a serpentine, which encrusts manganoan Calcite with very sparse Franklinite and Willemite. Only a few specimens are known, thus rare at this locality. 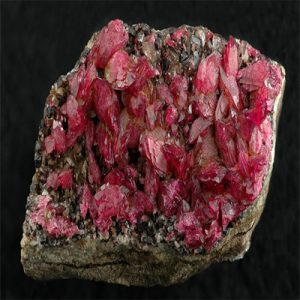