Wernerite was at one time an alternate name for the Scapolite Group of minerals and at one time considered to be an intermediate member of the Scapolite Group, but is now an obsolete name. Although the name Wernerite was rejected by the IMA, some mineralogists believe it may be deserving of species status (see Dana, 8th Ed.). As a testament to its historical standing, Wernerite was listed as “the most important member of the scapolite group” in the first edition (1896) of A Dictionary of the Names of Minerals by Albert Huntington Chester, Professor of Mineralogy of Rutgers College.

Wenerite was named in 1800 by Brazilian mineralogist José Bonifácio de Andrada e Silva (1763-1838) to honor Abraham Gottlob Werner (1749-1817), a professor of mining and mineralogy at the Freiberg Mining Academy, Germany. Werner was an influential teacher and his ideas shaped early geological thought. He has been called the “father of German geology”. Werner is credited with describing and naming many minerals including Anhydrite, Apatite, Augite, Boracite, Carpholite, Celestite, Chlorite, Graphite, Grossular, Helvite, Hyalite, Iolite, Labradorite, Laumontite, Leucite, Melanite, Nephrite, Olivine, Omphacite, Prehnite, Pyrope, Rutile, Torbernite, Vesuvianite, Vivianite, Witherite and Zeolite, as well as many other names that are now synonym names of other minerals.

In September 1792, José Bonifácio de Andrada e Silva went to Germany to attend the Frieberg Mining Academy to study under Werner. José Bonifácio was a mineralogist, naturalist, poet and professor of geology. He discovered and named four new mineral species: Cryolite, Petalite, Scapolite and Spodumen. He also named these eight mineral varieties (or synonyms): Acanthicone (syn. of Epidote), Allochroite (syn. of Andradite), Aphrizite (a black variety of Tourmaline), Coccolite (syn. of Diopside), Ichtyophtalme (syn. of Apophyllite), Indicolite (blue variety of Tourmaline),Salite (variety of pyroxene) and Wernerite. José Bonifácio named most of the minerals which he discovered with scientific names derived from Greek words, with the exception of Wernerite. The mineral Andradite was named in 1868 by American geologist and mineralogist James Dwight Dana (1813-1895) in honor of José Bonifácio de Andrada e Silva. 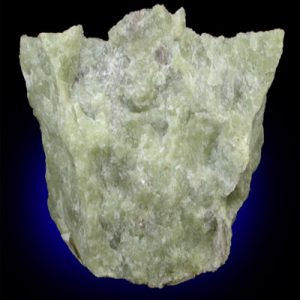