Willemite is a rare zinc silicate mineral that is a member of the Phenakite Group of minerals that also includes Eucryptite and Phenakite. It is known and desired by collectors for its wonderful fluorescence. Willemite fluoresces a bright green under both short wave (SW) and long wave (LW) ultra-violet (UV) light. It is one of the best examples of a fluorescent mineral and is a must have for collectors of fluorescent minerals and gems. Willemite is often associated with Calcite which glows intense red under SW UV light. The combination of these two minerals glowing bright green and intense red makes for spectacular specimens. Some Willemite specimens will even show phosphorescence. Phosphorescence is the ability of a mineral to glow after the initial light source is removed. The mineral stores the energy of the light and re-emits light for a short time.

Willemite is found as colorless, white, gray, various shades of green, yellow, orange and red-brown crystals. Crystals can be prismatic, both stout and slender, terminated by rhombohedra, to 10 cm in length. It is one of the few silicate minerals that have a trigonal crystal symmetry. This symmetry is much more common among carbonates than silicates. Willemite shares the same symmetry with the silicate Dioptase and the closely related silicate Phenakite.

Willemite was originally named “silicious oxyde of zinc” in 1824 by American geologists Lardner Vanuxem (1792-1848) and William Hypolitus Keating (1799-1824). It was re-named in 1830 by French born mineralogist Serve-Dieu Abailard “Armand” Lévy (1795-1841) in honor of William I (Willem) (1772-1843), first King of the Netherlands, from 1813 to 1840, where the type locality was located at the time. William I (Willem Frederik) was Prince of Orange-Nassau, the first King of the Netherlands and Grand Duke of Luxembourg.

Willemite distribution: in Belgium, from Altenberg, near Moresnet. At Tsumeb and Guchab, Namibia. From Kabwe (Broken Hill), Zambia. In the USA, large crystals at Franklin and Sterling Hill, Ogdensburg, Sussex County, New Jersey; from Balmat, St. Lawrence County, New York; in Arizona, from the Mammoth-St. Anthony mine, Tiger, Pinal County, at the Red Cloud mine, La Paz County, and other minor localities; in California, at the Ygnacis and Cerro Gordo mines, Inyo County; in the Tres Hermanas district, Luna County, New Mexico. From Mont Saint-Hilaire, Quebec, Canada. In a large deposit at the Puttapa zinc mine, near Beltana, South Australia. There are many other minor localities. 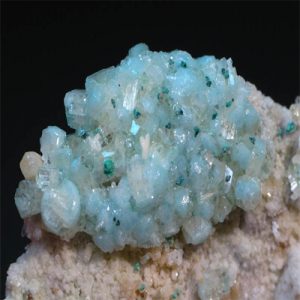