Wilsonite is a pinkish mauve to rose red variety of Muscovite that is named in 1853 by T. S. Hunt for Dr. James Wilson of Perth, Ontario, Canada, who discovered the material at Bathurst Township, Lanark County, Ontario, Canada. Wilsonite is an aluminosilicate of magnesium and potassium and almost identical in composition, hardness and density to Gieseckite and very similar to Alurgite, also varieties of Muscovite, although Wilsonite has distinct cleavage form and crystal habits. Wilsonite may be pseudomorphous after Nepheline or Cordierite or possibly an altered Scapolite. Wilsonite cabochon gems are uncommon and beautiful with mauve to rose red colors. 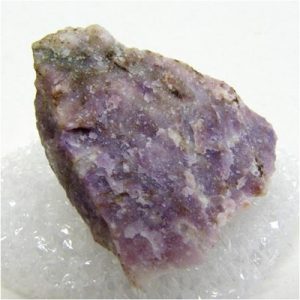