Wiluite is a very rare variety of Vesuvianite that was discovered in 1997 in the Wilui River Valley of the Eastern-Siberian Region of Russia. It is a very complex silicate mineral containing calcium, aluminum, magnesium, iron, titanium and boron in addition to the basic silicate minerals. Wiluite crystals are usually well-formed euhedrals of dark green color and are translucent to opaque. 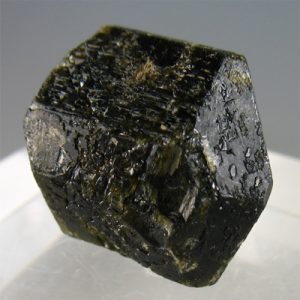