Woodhouseite is named after Professor Charles Douglas Woodhouse (1888-1975), American Mineralogist and mineral collector, University of California, Santa Barbara, California, USA. It is a secondary mineral found where sulphatic wall rock alteration occurred in usually low temperature hydrothermal and disseminated ore deposits; also rarely in cave deposits. Woodhouseite is a difficult mineral to classify in that it has both a phosphate anion group and a sulfate anion group. An Anion is an ion with more electrons than protons, giving it a net negative charge. Both of Woodhouseite’s anion groups are intricate and essential in its structure but Woodhouseite is generally considered to be in the Phosphate Class due to other classification schemes.

Woodhouseite is mostly found at a single location; the Champion Andalusite Mine on the western slopes of the White Mountain Peak in Mono County, California.Other locations are fairly minor. Woodhouseite typically forms as colorless to flesh-colored pseudocubic rhombohedrons. The crystals may look nearly cubic, but the angles between the faces are not exactly 90 degrees as is required for a true cube. Crystal faces tend to be curved and striated. It forms in Quartz veins with Topaz, Tourmaline, Andalusite and Svanbergite. 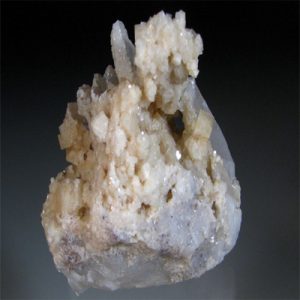