Xenotime-(Y) is one of the very few yttrium gems. Xenotime is also a rare earth element (REE) mineral which means it contains some of the elements from the lanthanide series of elements. Although the chemstry of Xenotime is generally accepted as YPO4, analysis by electron microprobe reveals trace amounts of the REE elements dysprosium (Dy), erbium (Er), europium (Eu), gadolinium (Gd), holmium (Ho), lutetium (Lu), neodymium (Nd), samarium (Sm), terbium (Tb), thulium (Tm) and ytterbium (Yb). Along with these rare earth elements, the elements thorium (Th) and uranium (U) may replace the yttrium. Therefore, even though Xenotime is not generally considered to be a radioactive mineral, some Xenotime speciments may be weakly to strongly radioactive. Although there are two Xenotime minerals, Xenotime-(Y) with yttrium dominant, and Xenotime-(Yb) with ytterbium dominant, most Xenotime specimens (and gems) are Xenotime-(Y) with yttrium being dominant. Xenotime-(Yb) is very rare. Therefore, when referencing Xenotime, the -(Y) suffix is not often used.

Xenotime is named from the Greek words kenos (κευός) meaning vain and time (τιμή) meaning honor, more accurately translating to “vain glory”. It was so named by French mineralogist François Sulpice Beudant as a rebuke of another scientist, Swedish chemist Jöns Jacob Berzelius, who claimed to have discovered a new chemical element in Xenotime which was later found to be the previously discovered yttrium. Xenotime was originally spelled “Kenotime” from the Greek word kenos, but over time “kenotime” was misread and misprinted as “xenotime”.

Although Xenotime is found in many localities throughout the world, gem quality crystals are very rare. Xenotime gems are usually a translucent yellowish brown to reddish brown with vitreous to resinous luster and a Moh’s hardness of 4-5.

Xenotime distribution: numerous localities but fine crystals are unusual. In Norway, from Lindesnes; on Hidra (Hitterö) Island; around Tvedestrand and Arendal; at Raade, near Moss; and elsewhere. From Ytterby, on Resarö Island, near Vaxholm, Sweden. In Switzerland, from the Binntal, Valais; in the Maderanertal, Uri; in the Tavetsch, Graubünden; and many other places. Large crystals from the Yazgulem Ridge, western Pamir Mountains, Tajikistan. At Sahamandrevo, near Ampangabe, Madagascar. In the Ishikawa district, Fukushima Prefecture, Japan. In Brazil, from Ataleia and Ibitiara, Minas Gerais; at Brumado and Novo Horizonte, Bahia. In the USA, in North Carolina, from placers in Polk, McDowell, and Burke Counties; on Cheyenne Mountain, El Paso County, and elsewhere in Colorado. In the Gunter quarry, near McKenzie Lake, Ontario, Canada. 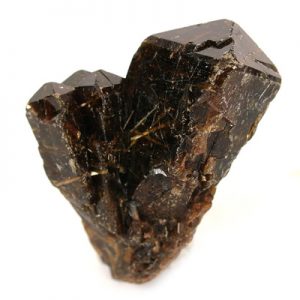